This shotgun was made for and presented to the consignor's father, Colonel Charles Askins by AyA co-founder, Agustin Aranzabal, a close friend and shooting companion of Colonel Askins. Colonel "Boots" Askins worked in law enforcement , U.S. Forest Service and Border Patrol in the American Southwest prior to WWII. He served in the U.S. Army during WWII and served as a battlefield recovery officer making landings in North Africa, Italy and on D-Day. After WWII he spent several years in Spain as an attaché to the American Embassy there, helping Franco rebuild Spain's munitions plants. After Spain he moved to the Vietnamese front where he trained South Vietnam soldiers in marksmanship and airborne operations. He was also a writer and indulged in the big game hunting. He held several big game hunting records, two national pistol championships, and an American handgunner of the year award. Colonel Askins passed away in 1999. The shotgun features double steel bead sight on the solid matte rib, the chambers gauge well past 3 1/2 inches, with ejectors. The top of the left barrel is gold inlaid "SPECIALLY MADE FOR CHARLES ASKINS" and the right "FCA AGUIRRE Y ARANZABAL - MADE IN SPAIN", also gold inlaid. There is a 1 inch wedge of floral engraving on top of each barrel at the breech and muzzle ends, (also the sides of the muzzles), and 1 inch floral engraving on the breech end of the rib. The frame and side locks feature a fine floral scroll and floral designs with a wooded scene with relief engraved dogs running down a wild boar on the left side a wooded scene of dogs attacking a wolf. The fences are engraved with relief engraved ducks and there is a relief engraved hunting dog on point on the bottom. The serial number is semi relief engraved on the lower tang. The deep engraving is superb with detail and realism rarely seen on guns of that era. Gold firing pin bushings, 8 pin side locks with gold cocking indicators, gold inlaid "AYA" logo on the break lever, gold washed single trigger, tang mounted manual safety. Gold wash/plating of internal parts was still a special touch when this gun was made. Mounted with a checkered beaver tail forearm and pistol grip stock with decorative carved grip cap, Pachmayr vented recoil pad and a gold U.S. Army symbol over "CH A" on the bottom near the toe. These guns were handmade, individually fitted and engraved, and no two are exactly alike. Colonel Askins was (and still is) fondly remembered by the Aranzabals and AyA and is mentioned in AyA's history, on the AyA website.

Excellent. The barrels retain 99% original blue finish with dried oil residue along the rib and ahead of the forearm. All of the gold inlay remains. The trigger guard retains 99% plus original blue finish with a couple of tiny dings on the edge. All of the coin finish remains on the remaining parts with some discoloration from oiling. The stock is fine. At some time some what appears to be glue has gotten on the stock and has taken some of the varnish off and left some bubbling and there are a few minor scratches. The forearm is excellent with a few minor dings and overall the checkering is crisp. The engraving remains crisp. Mechanically excellent. 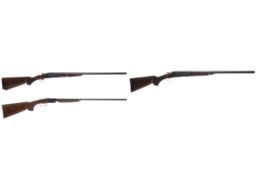 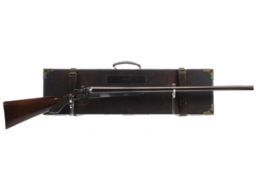 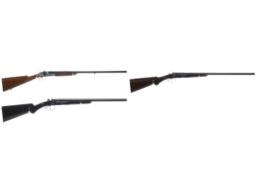 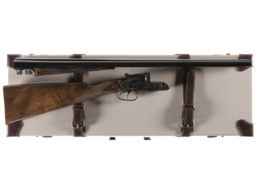 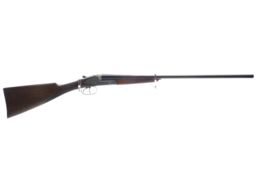 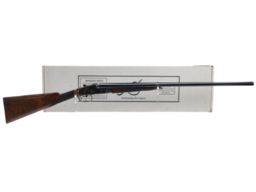