Massive double-barrel flintlock pistol with folding bayonet made by Robert Wogden of London around 1760. The right barrel is inlaid with the inscription: "PRESENTED TO SIR HENRY CLINTON BY GEORGE III". The left side of the barrel is inlaid: "WOGDON & CO. LONDON 1760". George III reigned as King of Great Britain from 1760-1820. He appointed Sir Henry Clinton as Commander in Chief for North America in 1778. Sir Henry Clinton held that post until 1782, shortly after the British defeat at the Battle of Yorktown. He subsequently served as a member of Parliament from 1783-1790 and was appointed Governor of Gibraltar in July of 1794 but died in 1795 before could assume that position. Robert Wogdon (1737-1813) was a London gun maker famous for his high quality pistols. He worked in London from 1774-1802 but was part of the firm of Wogdon & Bannum after 1795. Based upon the inscription, this pistol was probably made shortly after George III assumed the throne in October 1760. The pistol has side-by-side, smoothbore, octagon barrels topped by a spring-fastened, seven-inch, angular bayonet. The pistol has two, flat, flush-fitted lock plates with goose-neck hammers, integral iron, fenced, flash pans, frizzens with delicately curved tops and toes and roller-mounted frizzen springs. The lock plates, hammers and frizzens have engraved, double line borders and are decorated with inlaid scroll work. "WOGDON" is inlaid on the sides of the lock plates ahead of the hammers. Scrollwork flourishes are inlaid on either side of the barrel inscriptions. The top of the barrel is stamped with London proof an view marks, a Broad Arrow and a "Crown/W' inspection mark. The wedge-fastened, dark, English walnut stock has brass furniture. The wedge escutcheons ramrod pipe trigger guard and strapped buttcap are engraved with tight, English, scrollwork. The front of the trigger guard bow is shaped like a serpent grasping the rear of the bow in it's jaws. The top of the grip is inlaid with a silver, heart-shaped, thumb-piece filled with scroll engraving and surmounted by a crown. An iron ramrod pipe is located beneath the barrels and retains a wooden, brass-tipped ramrod. The pistol is complete with a mahogany case with six compartments. The case is not lined. The case contains: (1) cylindrical powder flask with wooden body and brass base, top and fixed charger, (2) screw-driver with wooden handle, (3) iron, single cavity, round ball, bullet mold,(4) ebony cleaning rod with brass tip and ivory handle and (5) two spare flints.

Good. The barrel has been lightly cleaned and has a silver-gray patina with scattered pitting. The pitting is heavier adjacent to the flash-holes and the proof and view marking are faint. The barrel inscription and maker's markings are legible. The inlays on the barrel and locks are tarnished. The locks have been partially cleaned and have a dark brown patina in protected areas and a silver patina on contact points. The lock plates show moderate-heavy flash pitting and the markings are difficult to discern. The stock is in good condition with no cracks or chips. The brass furniture has been polished but is developing an age patina. The engraving of the brass furniture and silver thumb-piece is crisp. This is a rare example of an unusual double-barrel flintlock with folding bayonet made by a famous 18th century London gun maker and inlaid with a presentation from King George III of England to one of the most important British generals in the American Revolution. This is a historic and unique pistol. 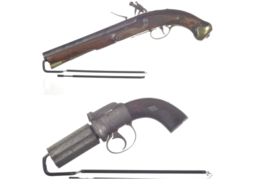 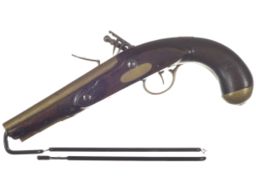 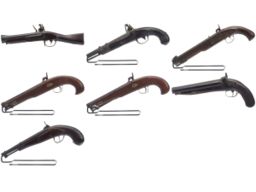 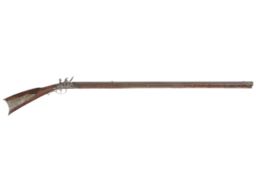 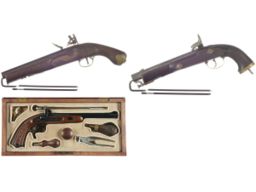