Very fine. The carbine is all original and retains 85% plus of the original blue finish. Most of the blue finish is present on the barrel and magazine. The blue on the lower portion of the magazine is thin and there is some scattered patches of age discoloration on the top of the barrel near the Winchester legend. The barrel bands have a silver-gray patina and the upper band screw is missing. With the exception of the non-factory marking, the receiver is in near excellent condition. The receiver has a very attractive dark mustard yellow patina with perfect side plate joints. Wear is limited to a few insignificant scratches and some small spots of surface discoloration of the top of the receiver. The buttplate has the same patina as the receiver and is excellent. The hammer, trigger and lever retain 80% or more of the muted case colors. The stock and forearm are excellent with nearly all of the original finish and display only minimal storage and handling marks. Winchester Model 1866 carbines were working firearms that inevitably show age and hard service. Early production flatside carbines are scarce in any condition and are only rarely encountered with the amount of original finish found on this outstanding example. This is an extraordinary example of a first year production Model 1866 flatside carbine that would be a standout piece in the most advanced collection of Winchester firearms.

This first year production flatside carbine was manufactured by the Winchester Repeating Arms Co. in 1866. The carbine has the distinctive brass (gunmetal) receiver and crescent buttplate with blue 20-inch barrel and 13-shot magazine. The hammer, trigger and lever are color casehardened. The loading gate is niter blue. The stock and forearm are straight grain American walnut. The carbine has the First Model flatside features that include: flat loading gate cover, Henry drop receiver profile with no flare (i.e. flatside) at the junction of frame and forearm, two-screw upper tang and concealed serial number located on the left side of the lower tang. The barrel has a flat, un-crowned muzzle and is roll stamped with the early first style legend "HENRY'S PATENT OCT. 16.1860/KING'S-PATENT-MARCH 29.1866" in two lines ahead of the rear sight. The upper barrel band has an integral steel front sight and the barrel has the early two leaf carbine rear sight with "300" and "500" yard elevation markings. The magazine has the early screw-in plug. The receiver has a staple mounted saddle ring on the left side, small lever and large lever catch with flat head. The hammer has the early coarse knurling. The brass buttplate has the Henry style sharp pointed heel with hinged trap door. The serial number, "13165", is located on the left side of the lower receiver tang, in the upper tang inlet of the stock and on the inside of the buttplate at the heel. All of the visible serial numbers match. A small assembly number "188" is stamped on the left side of the lower tang in front of the serial number. A non-factory period marking: "159 H. H. BND" is punch marked on the left side of the receiver above the saddle ring (see photo). The mark is approximately 1 1/8-inch long and 1/4-inch high; the significance of the mark is unknown. 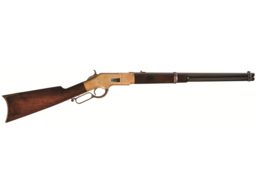 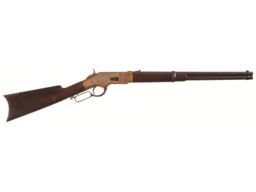 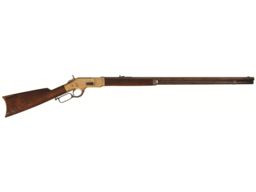 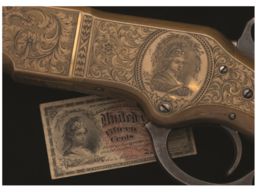 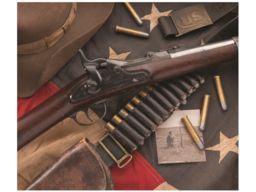 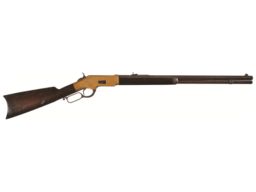