Henry lever action rifle manufactured in September 1862 during the fourth month of production. The rifle has the distinctive Henry 'gunmetal' (brass) receiver and buttplate and octagon barrel with integral 15-shot magazine. This early production rifle has the first pattern receiver with rear sight dove-tail. The barrel has a nickel-silver, early style, half-moon front sight and a dove-tail mounted, folding leaf rear sight with 900 yard center notch. The magazine has the first pattern, small diameter, follower and the receiver has the early straight cut follower slot. The receiver has the second pattern loading lever with lever latch introduced about serial number 400. The hammer has borderless knurling on the spur. The straight grain American walnut stock is not fitted with a sling swivel and the left side of the barrel lacks the screw-fastened loop for a sling hook. The sling swivel and loop were extra cost, special order, features on early-mid production Henry rifles. The brass buttplate has the first style rounded heel. The buttplate has a hinged trap door. The top barrel flat is roll-stamped with the first style legend "HENRY'S PATENT OCT. 16. 1860/MANUFACT'D BY THE NEWHAVEN ARMS CO. NEWHAVEN. CT." in two lines. The first style legend is shorter (approximately 2-17/32 inches long) and has Roman (serifed) letters except for the final "NEWHAVEN" in the second line which utilizes Gothic (block) letters. In the high 3000 serial number range a larger, 3-9/32inch legend was adopted that featured all serifed letters. The serial number "896" is located on the top barrel flat immediately ahead of the receiver, the lower left side of the tang underneath the stock the upper stock inlet, the inside of the buttplate heel, the shanks of the fitted buttplate screws and the shanks of the three tang screws. All of the visible serial numbers match. Although the Federal government purchased only about 1700 Henry rifles during the Civil War; most of the Henry rifles manufactured between 1862 and 1865 are believed to have been privately purchased by individual Federal soldiers who wanted the advantage of the fire power offered by a lever-action, 15-shot, magazine rifle. The Henry rifle was particularly popular with soldiers in Illinois, Indiana, Kentucky and Michigan regiments. Following the Civil War, Henry rifles were equally popular in the frontier West. Archaeologists at the Little Big Horn battlefield recovered a substantial number of spent cartridges from Henry rifles used by Native American warriors. Civil War production Henry rifles, like this early example, are among the most historically significant 19th Century American firearms.

Good. The rifle is original with moderate handling wear. The barrel has a gray-brown patina with smooth metal surfaces. The barrel edges are sharp. The barrel appears to have been acid cleaned long ago. The barrel legend and serial umber are crisp. The rear sight is original to the rifle but the leaf will not elevate. The brass receiver and buttplate have a good-looking aged patina. The receiver and buttplate have scattered light scratches and handling marks. There are a number of shallow scratches and dents along the upper side plate joints and hammer screw. The hammer, trigger and lever have a silver-gray patina. The stock is in good condition with numerous minor handling marks. The hammer spring requires repair. This is a solid original example of a scarce, first year production Henry Lever Action rifle with the desirable early features. 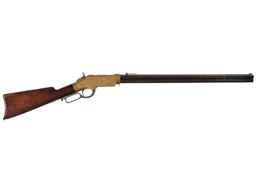 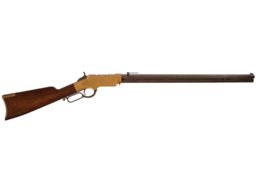 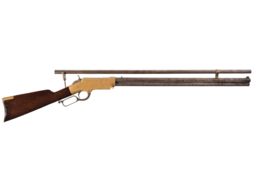 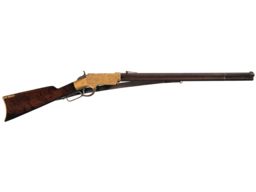