The Model 1873 was manufactured in 1895 in the "Third Model" configuration with the integral dust cover slide with rear serrations. It has a full length magazine tube mounted under an octagon barrel marked with the two-line address and patent information ahead of the rear sight and with the caliber designation "32 WCF" at the breech. It is equipped with a German silver blade front sight and an adjustable buckhorn rear sight (elevator absent). The serial number is marked on the lower tang, and the upper tang is marked "MODEL 1873" between to folate marks. The brass elevator is marked "32 CAL". The frame is engraved with a Wells Fargo stagecoach scene on the left side flat and "CAPT. FRED J. DODGE/WELLS FARGO/EXPRESS AGENT/1855 - - -1905/HOUSTON, TEXAS" on the right side flat. The front and rear sections on each side feature scroll engraving and a punch dot background. Fred J. Dodge (1854-1938) was a detective/undercover agent for Wells Fargo for many years prior to openly working for the company and was famous for solving crimes including the infamous Bisbee Massacre, numerous stage coach hold ups, and train robberies. He also helped pursue the Doolin and Dalton gangs. Dodge's diaries were key in the writing of "Life and Times of Wyatt Earp" and he was reportedly responsible for recommending Earp be hired as a stage coach guard. The included consignor research contains copies of many interesting documents including transcriptions of letters detailing stage coach attacks/holdups and Dodge's relationship with the Earps. Dodge retired to his ranch in Texas in 1917. The rifle is mounted with a smooth walnut forearm and straight grip stock with a crescent buttplate.

Fair as post period later custom engraved. The rifle has brown patina overall with some brighter high edge wear and a few minor marks and scratches. The engraving is very sharp and the markings are legible and most are crisp. There is some areas of light pitting. The wood is fair with numerous minor pressure marks and scattered minor scratches. Mechanically excellent. An interesting conversation piece, if nothing else! 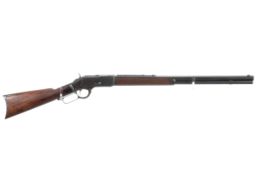 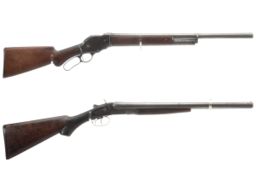 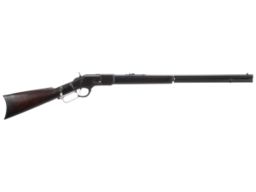 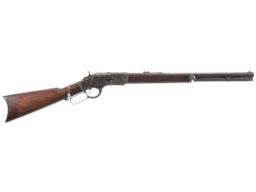 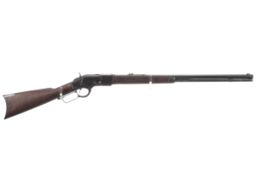 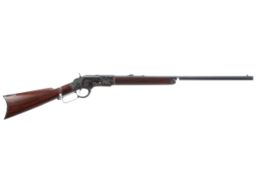