Winchester Model 1873 Rifle with Winchester Arms Museum letter. The letter describes the rifle features as "Round barrel, Plain trigger, 1/2 magazine and New clip" and states that it was shipped from the Winchester warehouse on June 6, 1884, with nine other arms as order number 12728. The rifle has the Third Model receiver with integral dust cover rail and dust cover with serrated rear edges. The barrel, forearm cap, receiver and dust cover are blued and the hammer, trigger, lever and crescent buttplate are casehardened. The stock and forearm are straight grain American walnut with a varnish finish. The rifle has special order 24 inch round barrel and half magazine. The barrel has a standard sporting style front sight with nickel/silver blade and a sporting style, buckhorn rear sight. The upper receiver tang is factory drilled and tapped. The crescent buttplate has a sliding brass trap door. The top of the barrel is roll-stamped "WINCHESTER'S-REPEATING-ARMS. NEW HAVEN. CT./KING'S-IMPROVEMENT-PATENTED-MARCH 29.1865. OCTOBER 16. 1860." in two-lines ahead of the rear sight. The caliber designation "44 CAL." is stamped in script letters on the top of the barrel just in front of the receiver. The upper receiver tang is roll-stamped "- MODEL. 1873-" in fancy letters with foliate devices at either end. "44 CAL" is stamped in script on the brass cartridge elevator. The serial number "150173A" is stamped in script numerals on the lower tang between the lever latch and the rear tang screw. Model 1873 rifles with the combination of full length round barrel and half magazine are rare.

Exceptionally fine. The rifle is all original and retains nearly 90% of the blue and casehardened finish. The blue on the barrel is thin in several areas and there are traces of light pitting in several spots on the top of the barrel. The forearm cap, receiver, dust cover and side plates retain at least 90% of the factory blue finish with some scattered age frosting and traces of edge wear. The hammer, trigger and lever have nearly all of the dark case colors intact. The case colors on the buttplate show more wear and have aged to a silver/gray with spots of dark age discoloration. The stock and forearm are in excellent condition and show only very minor handling wear. This is a an example of a documented special order Winchester Model 1873 Rifle. 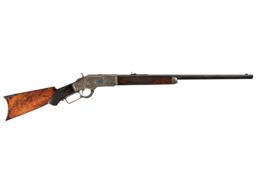 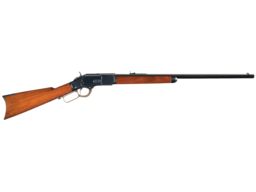 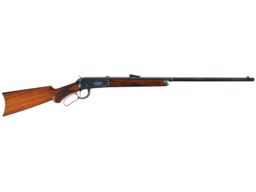 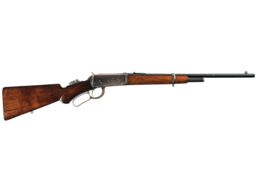 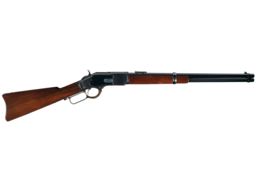 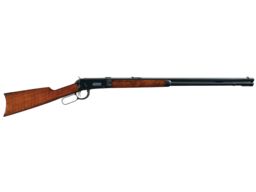