This revolver is documented in Robert Lee and R.L. Wilson's "Magnificent Colts" on pages 394-395 as a Thomas Tranter of Birmingham double action "Bulldog" revolver made especially for William A. Pinkerton, one of Allan Pinkerton's sons. The Pinkerton National Detective Agency, arguable the most famous American detective agency, was founded by Scottish born Allan Pinkerton in the United States in 1850 with the first office in Chicago. Today, the company operates as a division of the Swedish security company Securitas AB. President Abraham Lincoln hired Pinkerton agents for his personal security during the Civil War after Allan claimed to have foiled an assassination plot against Lincoln in February 1861 in Baltimore, and from 1861 to 1865, Allan served as head of the Union Intelligence Service, the forerunner of the U.S. Secret Service. The agency became legendary during their pursuit of Jesse James, the Younger Gang, the Dalton Brothers, and Butch Cassidy's Wild Bunch. When Allan died in 1884, the agency was taken over by his two sons, Robert and William. It seems fitting that this type of revolver was made for William. Purportedly, Allan had his men armed with Tranter revolvers and an eyewitness account published in "Magnificent Colts" shows that William was no stranger to Tranter revolvers. According to the eyewitness, William fired "two magnificent English Tr[a]nter revolvers…with great precision" against a prisoner aboard a steamer who tried to escape by jumping overboard. "[Pinkerton] began firing with considerable rapidity, so as to strike the water within a few feet of the man who was so unsuccessfully struggling against the tide," explained the eyewitness. William's ownership of this revolver is clearly spelled out in the inscription on the rib: "MADE FOR W.A. PINKERTON BY THOS. M. TRANTER 16. WEAMAN ST. BIRMINGHAM." Thomas Tranter was the son of noted Birmingham gunmaker William Tranter, famous for inventing the Tranter revolver and is listed in "Stockel" as having a shop in Birmingham from 1890 to 1900. Fine scrollwork is engraved on the barrel at the breech and muzzle, barrel lug, frame, trigger guard, cylinder flats at the front, and barrel release. British proofs are present on the barrel and cylinder flutes. The hammer, barrel release, trigger, and other small parts are niter blue, and the remaining surfaces are nickel. It is fitted with a checkered one-piece bird head grip. 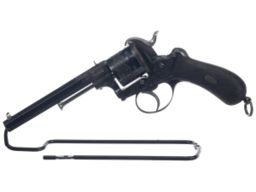 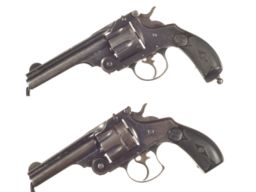 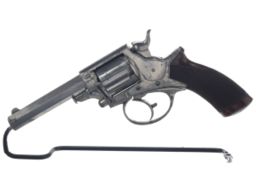 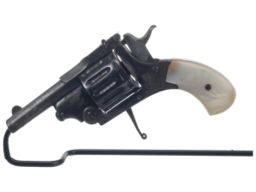 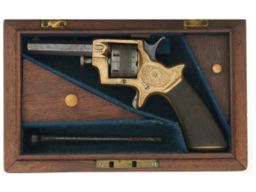 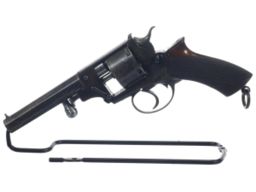