This is an extremely rare example of a very early experimental primer-actuated Garand semi-automatic (or autoloading) rifle. This model was eventually finalized as the Model 1924; however, it is typically called a Type 2 Garand as it was the second primer-actuated semi-automatic rifle designed by John Garand. This was a very unique and unusual concept rifle. Up until then, all cartridges used a flat indented primer that fit into a primer pocket in the base that was struck by a forward moving firing pin. In this primer-actuated design, the firing pin is actually somewhat larger than today’s and is cupped shaped and has the fixed firing pin tip in the center. When the rifle was fired, the round, non-rotating bolt struck the primer face and the resulting internal pressure of the case would have actually forced the primer reward 2-3 thousands (called primer set-back). This set-back would in turn force the firing pin rearward slightly (like a tappet) to assist/start to unlock the bolt and then the resulting extraction, ejection and reloading sequence. This rifle was NOT a turn bolt rifle design like the earlier model T1920; instead, it had a tipping bolt design where the rear of the bolt was locked up into the receiver, which actually allowed the primer actuated design to functional properly. In looking at this design, it seems rather complex in comparison to everything after, but it worked satisfactorily. It is estimated that 25 of these second models were manufactured in three different barrel configurations with different stock configurations. Eventually, the evaluation board standardized on a single stock and barrel configuration (24 inches like the 1903), and all of the examples were sent to infantry and cavalry units for field testing. The design again proved to be completely successful, allowing it to fire approximately 100 rounds in succession without any stoppages. However, in 1925 the Army threw John Garand a curve ball by adopted the new .30 Ball cartridge M1 as the new standard rifle ammunition in lieu of the old .30 Model 1906 cartridge. The major issue was the new cartridge used a totally different rifle powder called IMR powder, which stood for Improved Rifle Powder that is still in use today! Consequently, Garand completely abandoned this rifle design, leaving these 25 rifles as the only link to the final M1 Garand rifle design. This rifle is marked on the receiver ring: "GARAND/AUTOLOADING/RIFLE". It has the final 24 inch barrel, internal magazine (like the 1903 rifle), and a walnut stock design with a full length forend and top handguard and a separate buttstock. The barrel, front sight and barrel bands are all similar in design to the 1903 rifle. This is certainly a very rare and uniquely designed rifle that explains the direct lineage of the M1 Garand rifle. The consignor has stated that this rifle actually came from the John Garand's basement and the accompanying accessories (small notebook which is mostly blank, “U.S.” marked combination tool, front sight adjusting tool from this rifle, box of Frankford Arsenal 30-06 cartridges used for testing this rife, and a bottle of Plastilube) are from Garand’s personal collection. Note the box of cartridges (17 rounds) is dated Jan. 1923 and is marked “FOR EXPERIMENTAL DEPARTMENT/SPRINFIELD ARMORY” and “GARAND” and the Plastilube comes in a shipping container addressed to “J.C. Garand/Research & Development.” The rifle is pictured and described in Bruce Canfield’s “The M1 Garand Rifle” on page 49, Billy Pyle’s “The Gas Trap Garand” on page 29, and Maj. Gen. Julian Hatcher’ “The Book of the Garand” on page 70. The rifle won the Ten Best Arms Exhibited at the NRA Award in 2009, and the NRA medal for this honor is included.

Fine with considerable blue loss on the exposed metal surfaces and light erosion/pitting on the receiver and around the exposed front section of the barrel. The wood components are all fine overall and show handling marks and light pressure dents along the sides of the buttstock and wear around the edges in front of the buttplate. This rifle appears to actually be one of the so called "test" rifles and to have been retained by Garand after the testing was completed. This is extremely rare as most examples were reportedly destroyed after all the testing was complete. This rifle is a very rare and pivotal example of the direct lineage which lead to the final M1 Garand rifle design. 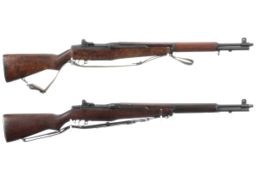 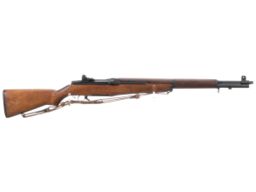 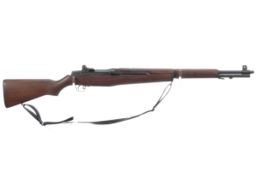 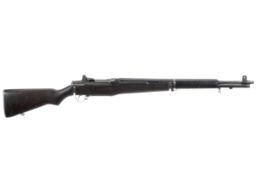 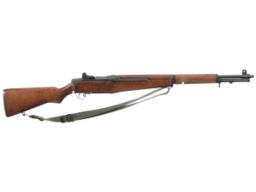 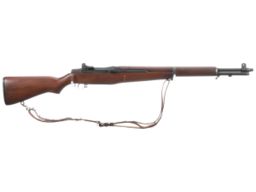