Developed in the late 1930s and early 1940s, the Smith & Wesson Light Rifle, aka the Model 1940, was conceived in response to a request by Great Britain for a lightweight semi-automatic rifle. S&W's response was mechanically novel, especially in the fully ambidextrous magazine well/ejector chute; this feature was relatively ahead of its time, it was generally outclassed by other carbines and submachine guns on the market, particularly the U.S. M1 Carbine. In competition, it squared off against the now-iconic U.S. M1 Carbine, with the additional handicap of severe ammunition trouble. The Light Rifle had been developed using commercially available 9mm Parabellum ammunition, which was not a chamber pressure match for the military-contract ammo issued during the test. S&W revisited the drawing board, resulting in the Mark II, which integrated a machined steel sleeve around the receiver, which acted as a reinforcement as well as a positive bolt-blocking safety. This was not enough to save the project, and the British shelved the Light Rifle, demanded a refund on their advance, and, once the pressing matter of World War II was resolved, took their stock of unwanted Light Rifles and threw them in the English Channel, leaving only 80 survivors in the United States. Many of these survivors are branded with a prominent metal plate declaring them unsafe to fire, a fate this example avoided. Blade front and elevation adjustable notch rear sights, with a fluted barrel, ribbed safety, signature combination magazine well/ejector port, and a smooth stock with a brown leather sling, and a ribbed buttplate. Also included is an extra blued steel magazine and nickel oiler, a mint condition factory original manual for the Model 1940 with silver embossed green leatherette cover, and letter from S&W stating the weapon is a collector's item of historical interest and importance, but that it should never be loaded or fired.

Very good, with near 95% original blue finish, showing some light spotting and handling marks overall. Some tool marks are visible on the tang screws, and the sling shows some light cracks and scuffs. The stock is very good, with some light scratches. Mechanically very good. 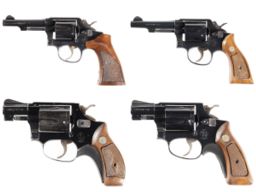 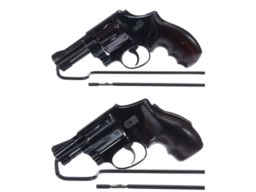 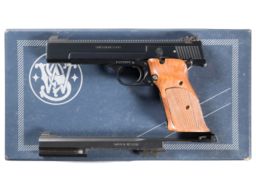 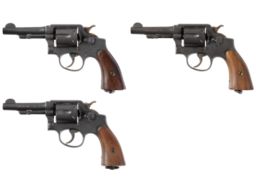 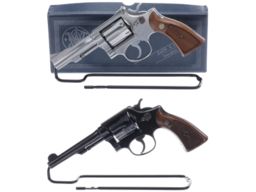 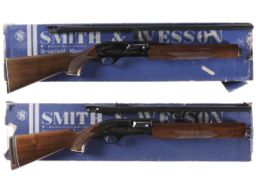