The Adolph-Weber pistols were the result of a partnership between M. Casimir Weber of Zurich, Switzerland, and Fred Adolph born in Germany but a resident of Genoa, New York, and are among the finest single shot pistols ever manufactured. Each was hand-made and built to a marksman's specifications, and the few extant or documented examples are essentially each unique. It appears Adolph did the final work on the guns himself. His catalog proclaimed "Never the same gun twice." Walter Roper referred to the Adolph-Weber as "an arm so fine that it was little short of perfection." They only enjoyed popularity for right around 1912-1915. They were several times more expensive than many other target pistols of the time. The pistol has a fixed bead blade front sight on the textured rib, an adjustable target rear sight at the breech, "238 F" on the bottom of the barrel, and "238" on the left side of the grip frame and hand-written on the back of the grips which have fine checkering and a raised shield shape flat on the left fitted with a silver monogram ("PAK"?). A gorgeous Fred Adolph double rifle owned by Theodore Roosevelt is in the National Firearms Museum.

Very fine overall. The pistol exhibits mostly plum brown-blue blend of fading original blue finish and smooth patina. The grips are very fine and have crisp checkering and smooth oiled finish. Mechanically excellent. This is a very attractive and rare early 20th century target pistol from the era when target shooting was among the most popular sports. 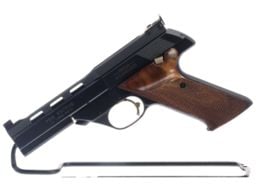 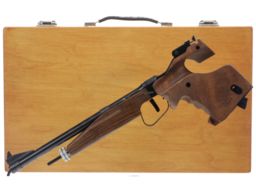 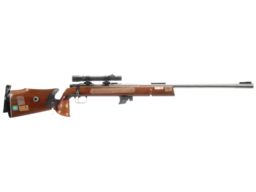 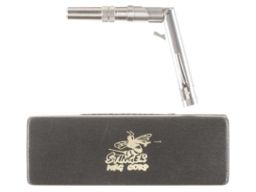 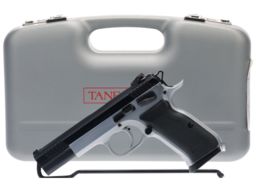 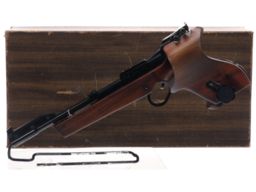