Blade and notch sights, with ""WG" ARMY MODEL" and "455/476" on the left side of the barrel, "WOODWARD & SONS, 64 St JAMES'S St, LONDON S.W." on the rib, the "winged bullet" logo next to "WEBLEY/PATENTS" on the left side of the frame, and "F.FITZHERBERT" on the back strap. An included letter from the Classic Gun Company of London attributes the inscription to Francis Edward Fitzherbert-Stafford, 12th Baron Stafford, being one of three revolvers from the inventory of the 15th Baron Stafford sold in 1997 due to tightening restrictions on handgun ownership in Britain. The 12th Baron received his first commission in 1877 with the Lancashire Militia (later the 3rd (Militia) Battalion of the Royal Lancaster Regiment), and would earn the Distinguished Service Order as a Major in the Second Boer War. He would also hold an honorary militia Lieutenant Colonel rank, a regimental Major in the Staffordshire Yeomanry, and serve as a Colonel with the Volunteer Training Corps during World War One. In civilian life, he inherited the title of Baron Stafford in 1913, and would serve as Justice of the Peace in Staffordshire and Lord High Steward of the Borough of Staffordshire. With a matching numbered barrel and cylinder, checkered bird's head grips and a lanyard swivel.

Fine, with 70% of the original high polish blue finish, showing areas of brown patina, bright edge wear and scattered spotting and handling marks. The right grip panel is very fine, with a chip absent from the tip of the otherwise very good left panel, lighter color on the right panel, and some mild dings. Mechanically excellent. 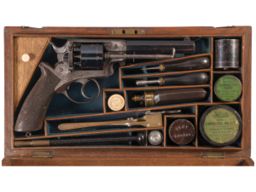 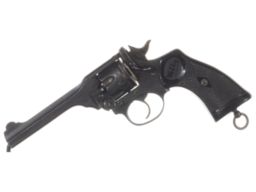 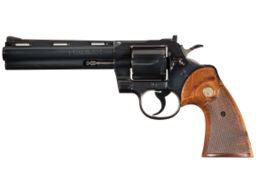 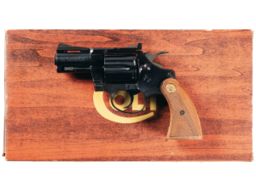 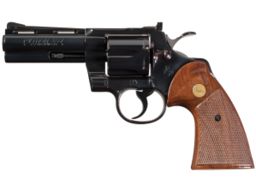 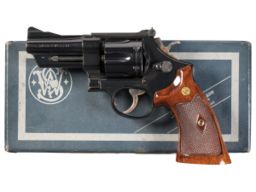