Brown Damascus barrels signed "R.B. Rodda & Co. Gun Makers by Appointment to H.E. The Viceroy of India" in gold on the left barrel and "and H.R.H. the Duke of Edinburgh. London, and 7, & 8, Dalhousie Square, Calcutta." in gold on the right barrel with solid rib, blade front sight, three leaf rear sight graduated to 150 yards, extractor and London proofs on the barrel flats. Casehardened action features extensive English scroll engraving, with an intricate dark maned lion's head engraved between the hammers on top, two bull elephant on the left side of the frame, and two rhinoceros engraved on the right side, "RB Rodda & Co." in gold on each lock plate, engraved to match under lever and sliding hammer safeties. Nicely figured pistol grip stock with multi-point checkering, hard rubber grip cap, cheekpiece, blank silver oval, and solid recoil pad. Comes with a leather bound case with "FJF" initials on the outside of the lid, paper Rodda Co. trade label on the inside, oiler, twenty solid brass cartridge cases using .50 BMG primers made especially for the gun, custom conical bullet mold, loading data, and flash drive with video of hunting with this 4 bore. John Ross used this rifle to kill two elephant and two cape buffalo in 1983 as shown on the included video. At that time he was the only living person on the planet to have used a 4-bore on dangerous game. Ross has loaded and fired over 1200 rounds of 4-bore rifle ammunition through four different guns (including this one) in the last four decades. He is one of the world's leading authorities on both loading for and shooting 4-bore rifles. This specific rifle was the inspiration for the 4 bore used by Henry Bowman, the protagonist in his popular 2nd Amendment novel "Unintended Consequences." A photograph of this rifle is on page 392. That book has been read by over a half million people, so this gun is arguably the most famous 4-bore in the world. According to Ross, this full-weight 4-Bore rifle is regulated for the 16 dram load, which was the heaviest load for which Rodda built guns. Black powder in the 1880s was made with Blackthorn charcoal and was more potent than current commercial black powders, as demonstrated by many modern tests. The rifle regulates with 450 grains (16-1/2 drams) of DuPont FG powder and a 1950 grain conical bullet for 1520 FPS. As shown multiple times in the supplied video and on YouTube, this gun and load will shoot through an elephant or buffalo broadside, and exit. Stock measurements: length of pull 14 3/8 inches; weight 23 lbs. 4 oz.

Fine. The barrels retain 95% brown Damascus with loss at the muzzles and breech and some thinning to gray, and some areas of cleaned pitting. The remaining metal surfaces retain minute traces of case colors in the protected areas, otherwise faded to a smooth gray patina. There is some minor pitting. The engraving is crisp. The wood is also fine as lightly sanded with a repair near the upper tang, scattered handling evidence and crisp checkering overall. The case is very good with wear and retaining most of the trade label. A rare opportunity to own a massive 4 bore double rifle from a fabled era of dangerous game hunting! 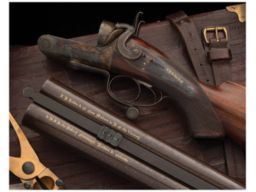 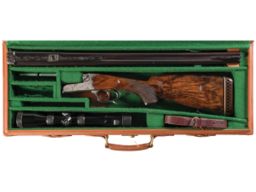 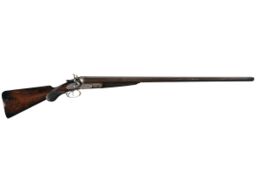 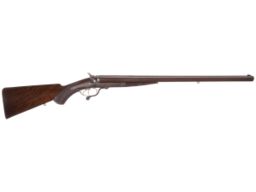 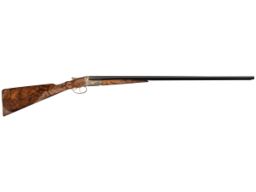 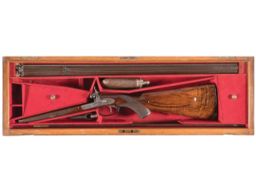