This rare 1837 dated N. P. Ames Model 1835 bronze 6-Pounder Field Gun would have seen use in both the Mexican-American War and the American Civil War. In 1835, the U.S. Ordnance Board recommended that the Army change the metal used in field guns from iron to bronze. N. P. Ames Company received a U.S. contract for the manufacture of 32 of these Model 1835 bronze guns, and Cyrus Alger & Company contracted to manufacture 26. Ames ultimately delivered 31 between 1837-1838. The Army of the Texas Republic also ordered 6 from Ames in addition to their sword contracts, which were delivered to Galveston in the fall of 1840. 6-Pounders such as this one were critically important to the American victory at the Battle of Buena Vista against superior numbers. Artillery under future Confederate general Captain Braxton Bragg was ordered to fire double canister shot by General Zachary Taylor who reportedly called out: "double shot your guns and give 'em hell." The 6-pounder field gun was well represented in the Civil War with several hundred used by Union and Confederate Armies in 1861. This was especially the case in the South where many former U.S. martial 6-pounders were seized at the outbreak of the war by the Confederates and then used to devastating effect in the first half of the war. Artillery use was particularly gruesome at Antietam where the rolling hills allowed both sides to perch more than 500 cannons on high ground increasing their effective range and allowing them to fire down upon troops left without cover. Confederate Colonel Stephen D. Lee referred to the battlefield at Antietam as "artillery hell." By the battle's end, 22,720 men were captured, missing, wounded, or killed. Virtually any pre-1861 dated 6-pounder could have been used by Confederate forces, and this gun certainly fits the bill. The trunnions are marked "N.P. AMES/FOUNDER/SPRINGFIELD." (right) and "1837" (left). "NO 6" is faintly marked on the top front above the muzzle. Two threaded holes are located on top at the muzzle, three holes near the vent, and three behind the breech at the top of the base, which would have likely been used with a Mexican-American War era "hammer" percussion primer. "9/751/G.T." marked on the rear surface of the breech, which may indicate this is the 9th delivered Ames gun, it weighs 751 pounds, and is marked with the inspection initials of George Talcott. The bore measures at just over 4 inches wide at the muzzle. The gun is mounted on a Steen Cannons of Ashland, Kentucky reproduction carriage with accoutrements. Includes a brass collection tag marked "76" attached to the ball. 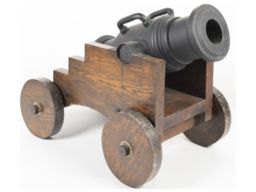 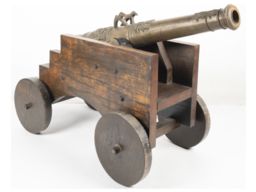 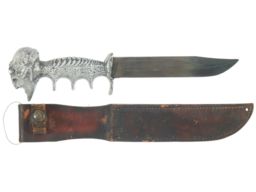 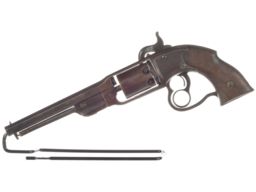 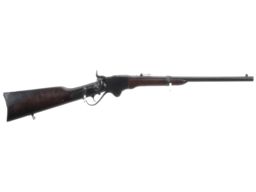 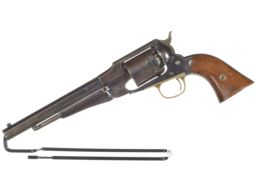