Designed by Sergei Simonov in 1938, the PTRS-41 (Simonov Anti-Tank Rifle) was manufactured throughout World War II between 1941-1945 and uses the same 14.5x114mm round as the PTRD-41 bolt-action anti-tank rifle, but with a magazine-fed semi-automatic action. Although tank armor advanced rapidly throughout World War II, one of the most famous incidents involving successful use of the PTRS-41 was during the Battle of Stalingrad in which one was positioned on the roof of a fortified apartment building that Red Army defenders held for 60 days between September 27th-November 25th, 1942 against the Wehrmacht offensive; the PTRS-41, aiming downward, ambushed numerous unsuspecting German tanks from above, knowing that the tanks were unable to elevate their weapons enough to shoot back, and penetrated their thin turret-roof armor causing massive damage to the crews inside. The PTRS-41 platform found a second life in the form of the SKS semi-automatic rifle, which took the PTRS-41 action and scaled it down to a shoulder arm chambered for use with the 7.62x39mm cartridge. This rifle features a large disc-shaped muzzle brake mounted to the blued barrel, hooded pin front and tangent rear sight, swiveling bipod, a hinged cover that opens from the bottom for loading with a five-round en bloc clip, a smooth wood pistol grip, and a wood club foot buttstock with multi-layered recoil pad. The right of the buttstock is marked with the Russian Izhmash factory mark consisting of an arrow inside of a triangle.

Very fine, retaining 80% of its original black finish with scattered light scratches and handling marks as well as some patches of light pitting. The bolt is bright with some light pitting. Retains 75% of the attractive original plum blued finish on the barrel with some light wear and handling marks. Stock is very good with some scattered mild scratches, crisp markings on the right of the buttstock, and retains its buttpad which has only light wear. Mechanically excellent. These impressive PTRS-41 semi-automatic anti-tank rifles are rarely seen today. NOTE: This Destructive Device is a National Firearms Act (NFA), fully transferable Class 3, which is registered with the Bureau of Alcohol, Tobacco, Firearms and Explosives, (BATFE) under the provisions of 18 U.S.C. Chapter 44 and 27 CFR part 478. 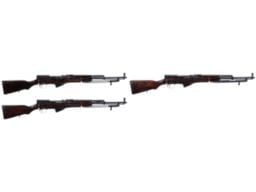 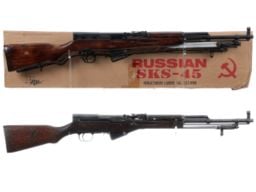 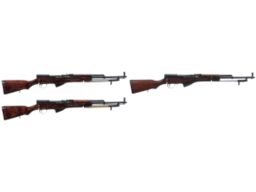 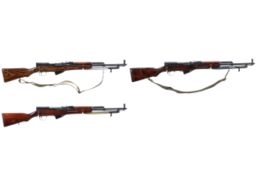 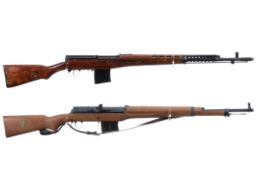