In January 2017 it was announced that SIG Sauer had won the highly competitive U.S. Military Modular Handgun System (MHS) contract to replace the Beretta M9 as the standard U.S. military sidearm, and later that year the U.S. Army announced the 101st and 82nd Airborne divisions were to be the first units to receive the M17. Only 3,000 of these pistols were returned to SIG Sauer for sale on the commercial market. The introduction of the M17 marked the beginning of the end to the M9’s service with the U.S. Armed Forces that originated in the late 1980s when it replaced the Colt M1911A1. If the service life of the M1911A1 and M9 are any indication to the longevity of the standard U.S. military handgun, it will be decades before we see a round of rigorous testing to replace the M17, making this early U.S. Army example issued to the famed 101st Airborne Division a historic piece of military hardware of the modern era that will only gain more collector interest in the future. The M17 is a variant of the SIG 320 modular pistol and integrates an ambidextrous thumb safety to the modular fire control unit, with illuminated night sights, optics mounting point on the slide, "+P" weight recoil spring, and coyote tan metal and polymer finish. The grip unit is marked size "M". The shipping box is a numbered match to the pistol and identifies it as "UDM17-9-SURPLUS" and contains two extra magazines, a standard weight recoil spring, cable lock, and papers. Per the included certificate, this pistol was part of the initial deployment of the U.S. M17 MHS Pistol in American service. An included Freedom of Information Act letter from the Department of Defense states this pistol was received by Lima Company, 3rd Squadron, 3rd Armored Cavalry Regiment in Fort Hood, Texas on January 7, 2018. On June 20, 2019 the pistol was turned in to the Logistics Readiness Center in Fort Hood and shipped to DLA Distribution in Anniston, Alabama where it was received on July 25, 2019. That same day it was shipped to SIG Sauer Inc. in Newington, New Hampshire.

Excellent as a documented Army issued pistol, retaining 95% original Coyote Tan finish with scattered handling marks and scratches from use at Fort Hood. As is typical of these pistols the grip frame shows scratches and dings with some wear of the grip texture. Mechanically excellent. Box is very fine with limited storage and handling marks. 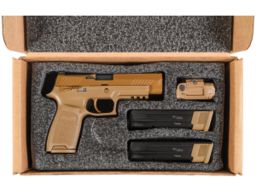 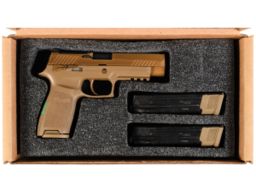 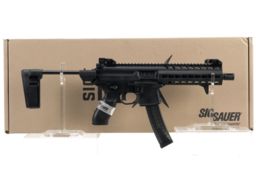 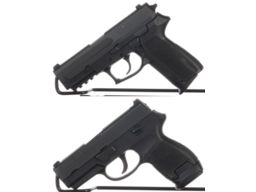 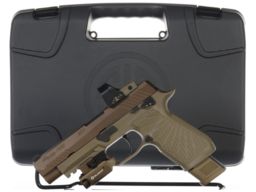 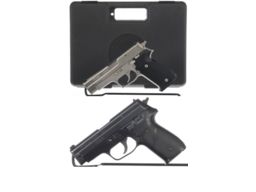