This is an extremely scarce Colt Model 1907 45 ACP Semi-automatic pistol, submitted by Colt for the U.S. Army "Test Trials" in 1907. This pistol is one of approximately 200 pistols manufactured under the Army Contract of 1907 for field trials. These pistols were initially shipped to Springfield Armory on March 1908 and inspected by Major Kenneth Morton of the Ordnance Dept on April 1908. All 200 were issued to field units, with this specific pistol issued to the Troop K, 10th Calvary, Fort William McKinley, Philippines. However in June 1909, Colt submitted a letter to the Chief of Ordnance, requesting to withdraw all of their test samples, due to numerous design and or manufacturing deficiencies found during the initial test firing of the field trials. Colt agreed to modify them to correct/improve the initial deficiencies and then returning them to the Army for further evaluations. As noted on page 35, in Clawson's book, the "Colt 45 Service Pistol", this specific example, serial number "36" was NOT one of those withdrawn, modified and reissued for later testing. These 1907 "Test Trials" pistols are extremely rare and very important for both Colt and U.S. martial pistol collectors from two aspects; one, this was the first U.S. Army contract pistol that was chambered in the excellent and ever popular 45 ACP cartridge. Although replaced in 1985 by the 9mm round for the new US service pistol, this cartridge is still being used by U.S. Special Operations Command in several pistols employed today. Two, this pivotal 1907 design and the subsequent modifications/redesigned Model 1909 and 1910 pistols lead directly to the development of the all time favorite U.S. Army Model 1911/1911A1 pistol that remained in service for over 74 years. This is certainly an extremely important link in any U.S. martial pistol collection. The right side of the slide is roll-stamped "AUTOMATIC COLT/CALIBRE 45 RIMLESS SMOKELESS" in two lines, and the left side is marked "PATENTED/APR. 20, 1897. SEPT.9.1902. DEC.19.1905." in two lines followed by "COLT'S PATENT FIRE ARMS MFG. CO./HARTFORD. CONN. U.S.A.". The serial number "36" is located on the left side of the frame above the trigger guard bow, which has the initials of Ordnance inspector "K.M." (Major Kenneth Morton). These pistols saw heavy initial use, and then were subjected to more use over the next 50-60 years. This example is good condition showing the rigors of field testing and follow-on refurbishment. Magazine absent. The accompanying factory letter lists this pistol with a 5 inch barrel .45 caliber, blue finish, type of stocks not listed, and several modifications when sold to the U.S. Government and shipped to Springfield Armory on March 17, 1908, as part of a 200 gun shipment.

Good condition with most of a refurbished/dipped blued type finish showing light pitting and erosion on the sides of the frame and slide under the blued finish. The moderately worn walnut grips are in good condition showing across the tops of the checkering mixed with some minor/light pressure dents on the sides. The markings are clear overall with the markings on the left side of the slide being slightly more obscured. A very scarce Colt Model 1907 trials pistol. 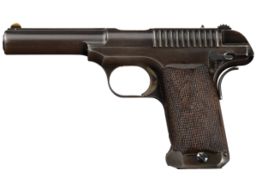 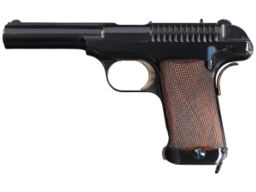 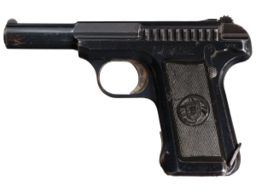 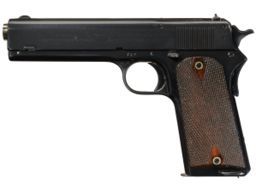 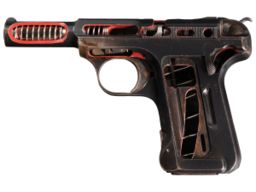 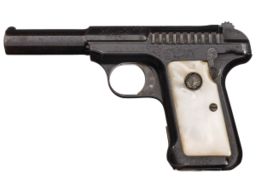