This is an excellent example of a late production BSA Martini MK III heavy barreled target rifle. The BSA Martini series of rifles were all developed by Al Freeland in conjunction with the BSA factory and sold through the Freeland gun shop in Rock Island, Illinois from the early 1960 through the late 1970s. This model was an improvement over the earlier MK I and MK II rifles that featured the undated/improved MK III action with a full adjustable trigger pull and over travel, that also featured a longer receiver with an extended aluminum forend hanger which allowed for a free-floating heavy barrel. The receiver measures approximately 6 inches long which allows it to supports approximately 3 1/2 inches of the barrel shank. The MK III rifles were all fitted with a BSA cut-rifled, 22 LR barrel, with a 1-16 inch twist , that measures approximately 1.10 inch at the breech and .850 at the muzzle, this combined with the free floating barrel, proved to make this an exceptionally accurate rifle. They were used by many of the top match shooters at all the small bore competitions throughout the U.S. as well as at Camp Perry, where they proved to be exceptionally accurate in the both the three position small bore shooting and also as a bench rest type rifle. This model has an all blued metal finish with a English walnut buttstock and forend. The right side of the barrel is marked with serial number UF1395 and the standard British proof marks on the left side. It has matching serial numbers on the breech block and trigger assembly and the left side of the receiver is marked "Made In England". This example has been modified by the addition of a Freeland adjustable hook buttplate on the buttstock. It is fitted with three original scope blocks, however it does not comes with any iron sights or sight bases.

Excellent with 98% of the original blue finish overall with minor edge and high spot wear with the breech block still in the white form the factory. As noted it has a very fine set of straight grain English walnut buttstock and forend., that show only minor handling marks on the sides. An excellent rifle ready for the target range. 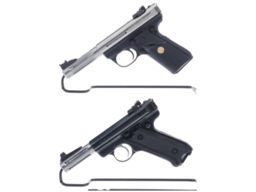 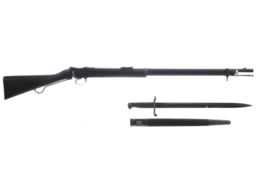 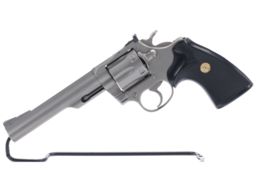 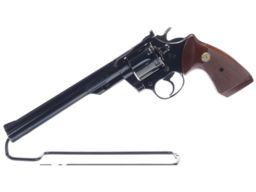 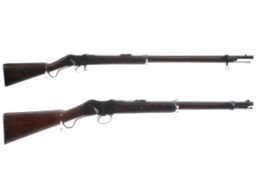 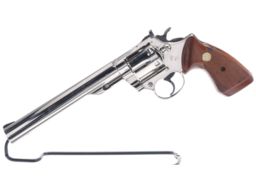